I-CAT partners with UP to develop localised dust suppression solution

The LDS system comprises a steel structure with strategically mounted nozzles, used to encapsulate dust particles and prevent them from becoming airborne. The system can also provide a cooling function, where needed, and can be customised to meet client requirements. The LDS can be erected around crushers, push feeds, screens, transfer points and tipping areas.

After the launch, I-CAT divisional manager Morné van Wyk told Mining Weekly that the company designed, constructed and commissioned an LDS system for the run-of-mine (RoM) tipping area of a local coal mine.

The client’s RoM tipping area featured trucks continuously offloading 220 t of ore into a crusher five storeys below, thereby displacing air and causing dust plumes. “The challenge was to create a solution that had both a dust suppression and a cooling function, as coal was frequently fed into the crusher while it was still hot, causing the conveyor belts to delaminate.”

Van Wyk noted that the University of Pretoria’s engineering department assisted in the conceptual design phase by conducting three-dimensional modelling for airflow and heat simulations.

The 11- m-high 16 m × 16 m steel enclosure also features 316 stainless-steel piping, sheets, nozzles and gantry. There are 48 dust suppression nozzles and three cooling nozzles. The top of the structure is angled inward to direct the airflow, which, in conjunction with I-CAT’s GTK and DMK nozzles, maximises the dust neutralisation efficiency.

The motion and temperature sensors activate the automated system once the truck enters the tipping area. The system also activates the cooling function if the temperature of the truck’s contents is 80 ºC or warmer.

Van Wyk explained that the nozzles create a high kinetic energy water mist droplet, which is a key component in the system’s effectiveness. “Coal and ash particles are smaller than 5 μm. One of the challenges with dust suppression is that the droplet size has to be the same micron size as the dust particles . . . only then will they bind, make the dust particles heavier and cause them to settle.”

The pilot system uses recycled water, which is processed, cleaned and pumped through a secondary dam before being piped to the nozzles. Commissioning of the LDS at the pilot started at the end of July, and the system was fully operational by the end of August.

Van Wyk noted that I-CAT would be installing a second system at the mine and was in the process of designing a structure for another South African coal mine. 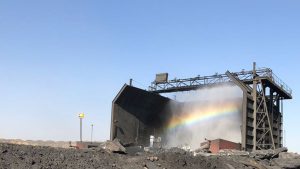 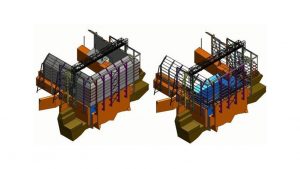 About 75% of coal mines in South Africa have to contend with the risk of the spontaneous combustion of coal dust when material is tipped from load haul dump trucks (LHDs). 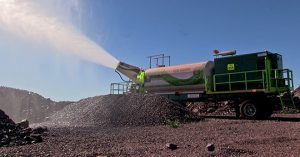 I-CAT offers highly-effective dust suppression systems for mines, based on extensive research and development, coupled with affordability. It is able to provide end-to-end integrated dust-management solutions that comply with all relevant industry regulations and standards. 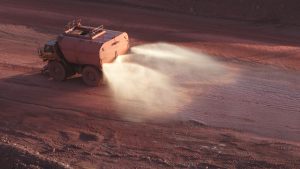 I-CAT offers highly-effective dust suppression systems for mines, based on extensive research and development, coupled with affordability. Thus it is able to provide end-to-end integrated dust-management solutions that comply with all relevant industry regulations and standards.